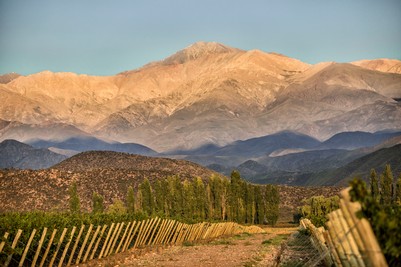 Waddle west from Buenos Aires and you’ll eventually reach Mendoza, located at the foothills of the soaring Andes. The mountains once formed an impenetrable barrier between Argentina and Chile; now, they watch over the malbec grape’s spiritual home. Though malbec originally comes from the French region of Bordeaux, its fuller-bodied beauty was unappreciated – as is the case for so many Fat Bastards – until it found a new home in Argentina in the mid-19th century. Now, 75% of the world’s malbec comes from Argentina, including Fat Bastard’s juicy drop, and Mendoza is at the scenic heart of its production.

What makes Mendoza so special?

Mendoza’s wine region produces Argentina’s most highly rated malbec wines and consists of over 350,000 acres of vineyards. The first malbec vines were imported from Bordeaux and planted in 1860, with the premium vineyards planted around 1000 metres above sea level. Given the mountain climate, the Mendoza wine region experiences a big temperature variation between the days and nights, resulting in the gradual ripening of grapes. What does this all mean? Full, juicy flavours guaranteed to get every Fat Bastard’s heart beating dangerously fast.

Why visit the Mendoza wine region?

As a city, Mendoza would be an enticing destination even without its wine industry. The town was destroyed by an earthquake in the mid-19th century and rebuilt with expansive streets and a bunch of pretty plazas around which life revolves. It has everything a Fat Bastard could ever desire including bars, restaurants and lots of green open spaces for a post-wine afternoon siesta. Outside of the city, adventure activities reign supreme with trekking and horse-riding being particularly popular, while mountaineers from around the globe are constantly answering the call of South America’s highest peaks. Below these mountains, rushing rivers offer up the perfect conditions for white-water rafting. And if flowing rivers aren’t your idea of a good time? Then let that wine flow instead. It’s enough to get any Fat Bastard off the couch and on the next flight to Argentina.

Commenting has been turned off.